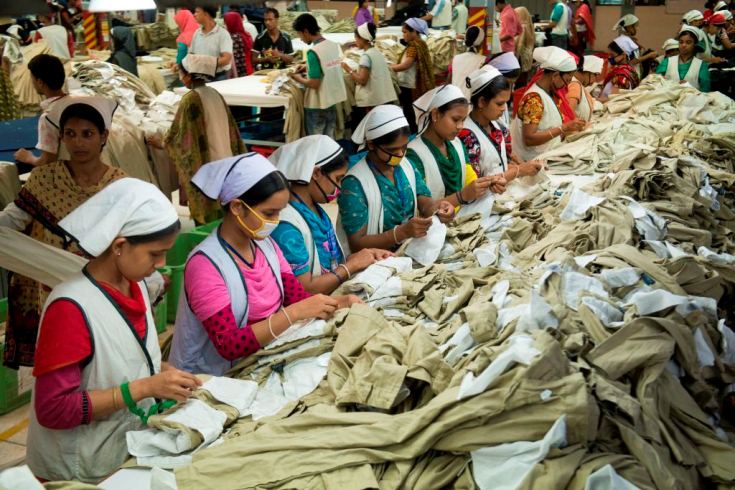 DHAKA, Oct. 24 (Xinhua) — Survivors and their loved ones on Thursday marked the six-month anniversary of Bangladesh’s worst- ever industrial tragedy, while many families express anger and annoyance due to lack of proper aid.

Rana Plaza, an eight-story building housing five garment factories crumbled into a cement grave on April 24 in Savar on the outskirts of capital Dhaka, killing more than 1,130 people, mostly workers.

Family members of some victims say they still had not received any compensation.

Many survivors also came in wheelchairs to commemorate friends and raise voices for compensation.

“I had to come to raise voice with all,” said a tragedy survivor sitting in a wheelchair.

“We need support from all to return to normal life.”

Hundreds of agitating workers along with survivors and victims’ family members rallied at the tragedy site, staged a sit-in and formed a long human chain in the morning. In the night many workers also held a candlelight vigil to mark the day.

During the morning’s sit-in, many family members wore black badges and ribbons. Survivors, family members and hundreds of workers, carrying banners and placards inscribed with slogans in favor of their demands, shouted slogans for due compensation from global brands for which the tragedy victims worked in the Rana Plaza factories.

A banner held by a group of orphans reads: “We’ve lost our parents for you — Walmart, Carrefour, Benetton…”

Agitating workers say retailers made promise but did not send their contributions.

A survey of nearly two-thirds of the survivors has found that many victims are still waiting for compensation.

The survey by British charity ActionAid reached over 2,297 people — both survivors and families of those who died in the tragedy.

The survey, with its result published on the anniversary, found that 94 percent of respondents reported they have not received any legal benefits.

Officials say the Bangladesh government has so far paid funds to nearly 800 people.

The Rana Plaza building collapse revived questions about the commitments of factory owners and their global buyers to provide safe working conditions in the annually $20 billion export sector, which comprises about 5,000 factories employing more than 4 million workers, 80 percent of whom are women.

Thanks to its cheap labor, Bangladesh is now the world’s second largest garments exporter after China, producing global brands for customers around the world. Yet the country’s garment industry has been severely criticized for safety concerns and labor unrest over rock-bottom wages in recent years.