People covered their faces with towels and scarves against the stench of death Monday, clogging the typhoon-ravaged roads of the hardest hit part of the Philippines in a traffic jam of desperation.

Headed into one center of devastation were Filipinos frantic to find loved ones, or help, or both; fleeing in the other direction were battered and fearful survivors of the howling winds and raging waves of supertyphoon Haiyan.

As the death toll surged and food and water became scarce three days after the storm, tens of thousands of refugees struggled to find their way to aid. With the return of cellphone signals and as rescuers cut their way toward isolated communities on Monday, the depth of the loss of lives became clearer. The government put the death count at 1,744—and it was expected to rise much further. Thousands remained missing.

On the streets of Tacloban, capital of the shattered province of Leyte, stiffened animal carcasses and human bodies were a common sight, some out in the open, others partly covered by tarps or sheet metal.

The road to Tacloban’s airport was jammed with people trying to get out as limited commercial service restarted. At the same time, the road into town was also snarled by motorbikes and cars—even as humanitarian workers warned that both food and water were rapidly running out. 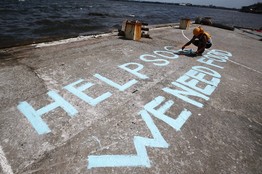 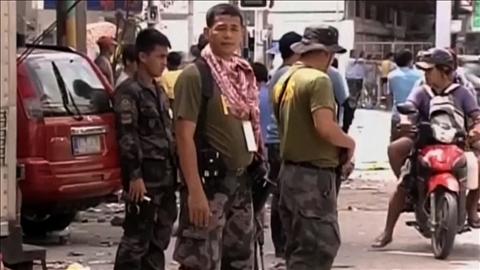 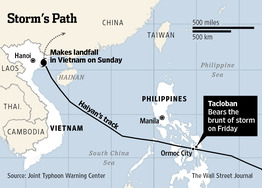 Aerial Views of the Devastation 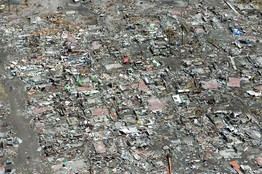 Flattened houses in the city of Tacloban. Ted Aljibe/AFP/Getty Images 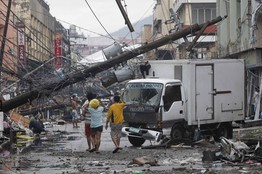 “Tacloban is a chaotic, dangerous place right now,” Nelia Baltazar, 52 years old, shouted over her shoulder from her perch on a motorbike behind her husband. “We just want to leave.”

Outside a gutted storefront in Tacloban, Diorico Montejo, sat on the pavement accompanied by half a dozen members of his family—except one. Mr. Montejo, 43, said he hadn’t been able to find his wife of 21 years since the storm hit their home Friday morning, despite searching hospitals and city streets.

Mr. Montejo said when the waves came in, the two of them swam out of an opening in their roof—an experience that left his arms, face and side crisscrossed with a series of deep gashes from the roof’s nails.

“The water was as high as that coconut tree,” he said, gesturing across the street. “In just two to five seconds, she was gone.”

In a country that due to its geography, high rate of poverty and flimsy construction is regularly leveled by typhoons, Haiyan, known locally as Yolanda, was one of the most powerful to ever hit land. The provinces of Leyte and Samar, both roughly 350 miles south of Manila, bore the brunt of the disaster. Rain from another approaching storm steadily pelted the area overnight and again early Tuesday, delaying assistance. That storm, tropical depression Zoraida, made landfall Tuesday without damage about 290 miles away from areas hardest hit by Haiyan.

In Samar, locals were fighting their own surreal horrors as the towns of Basey and Marabut were all but destroyed. Samar Gov. Sharee Ann Tan said 500 people were buried in mass graves in Basey, while others were said to be simply buried alongside streets, and an additional 2,000 were missing.

Meanwhile, 200 of the dead in Tacloban were to be buried together on Tuesday.

The devastated sections of the two provinces were the focus of PresidentBenigno Aquino III, who declared sweeping measures on Monday to bring relief to survivors and bolster rescue efforts.

The National Disaster and Risk Reduction Management Council said nearly 10 million people in 42 of the country’s 81 provinces were affected by the typhoon, one of the world’s worst storms. More than 28,000 houses were damaged.

Roads and bridges were being cleared and telecommunications services were being restored in some areas, leading to a more accurate view of the devastation.

As logistics gradually improved, President Aquino said 55,000 family food packs would be available daily. And 800 soldiers and police were sent to Tacloban to stop looters, clear toppled trees from roads and help search for survivors and the dead in the rubble.

The U.S. military is ramping up its military support to the Philippines, sending an aircraft carrier and other ships carrying 5,000 sailors and 80 aircraft into the region, officials announced Monday. They will join Marines sent Sunday from Okinawa, Japan. Pentagon press secretary George Little said the ships and aircraft will be able to provide humanitarian assistance, supplies, and medical care, and should be in position within 48 to 72 hours. 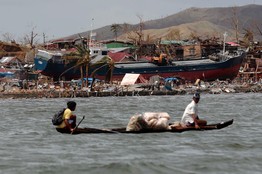 A ship lies amid house ruins in Tacloban, in the Philippines province of Leyte, one of the areas hardest hit by supertyphoon Haiyan. Associated Press

Other foreign governments were also sending additional equipment to ferry supplies as well as relief workers.

In Tacloban, an 8 p.m. curfew was instituted and was being enforced with the help of Manila police, some 200 of whom were already on the ground, said police inspector Randy Tulali. Police were also maintaining checkpoints and helping to provide security for the airport.

Michael Gnilo, Unicef water sanitation and hygiene specialist who is jointly working with the government, said Tacloban’s needs are amplified by the fact that people from other areas seeking relief from the typhoon have swelled its population of 220,000.

Three days after Supertyphoon Haiyan hit the Philippines, aid workers are still unable to reach Samar province in the Eastern Visayas due to heaving flooding. Orla Fagan of the UN’s Office for the Coordination of Humanitarian Affairs discusses areas where the extent of devastation remains unknown.

Standing inside an amphitheater seating more than 5,000 that is serving as temporary housing, Nonoy Fajardo, Unicef programs specialist, echoed his colleague’s fear. “You basically don’t need to do a needs assessment,” he said. “They need everything,” he said, citing the absence of latrines, among other sanitation hazards. He said he expects more relief, including from Unicef, to begin arriving in the coming days via land, air and sea.

At the airport, flanked by fellow officers, U.S. Marine Lt. Col. Mike O’Neil said some 200 Marines were preparing to help provide humanitarian aid, including assisting in flying some 90,000 tons of relief supplies waiting in Manila. Other planes laden with aid were likewise landing throughout the day.

Though the road into Tacloban was largely cleared of toppled trees and other debris early Monday, no signs of relief convoys were yet apparent by Monday night.

In the nearby city of Palo, where the wind bulldozed through hundreds of homes, making them resemble piles of crumpled matchbooks, residents queued for up to six hours for handouts of sardines and noodles outside a truck brought in by a local company.

“We have enough food for only one day,” said Mark Joe Mejico, 18, whose house was destroyed and who was sheltering in a local high school.

But as he waited in line, he was primarily worrying about his sister in Manila, whom he hadn’t yet been able to reach to tell her that he had survived the typhoon.

Others say their supplies can’t last more than a few days. Or, as one Tacloban resident put it, in large letters painted on a wall near the sea, “Save Us