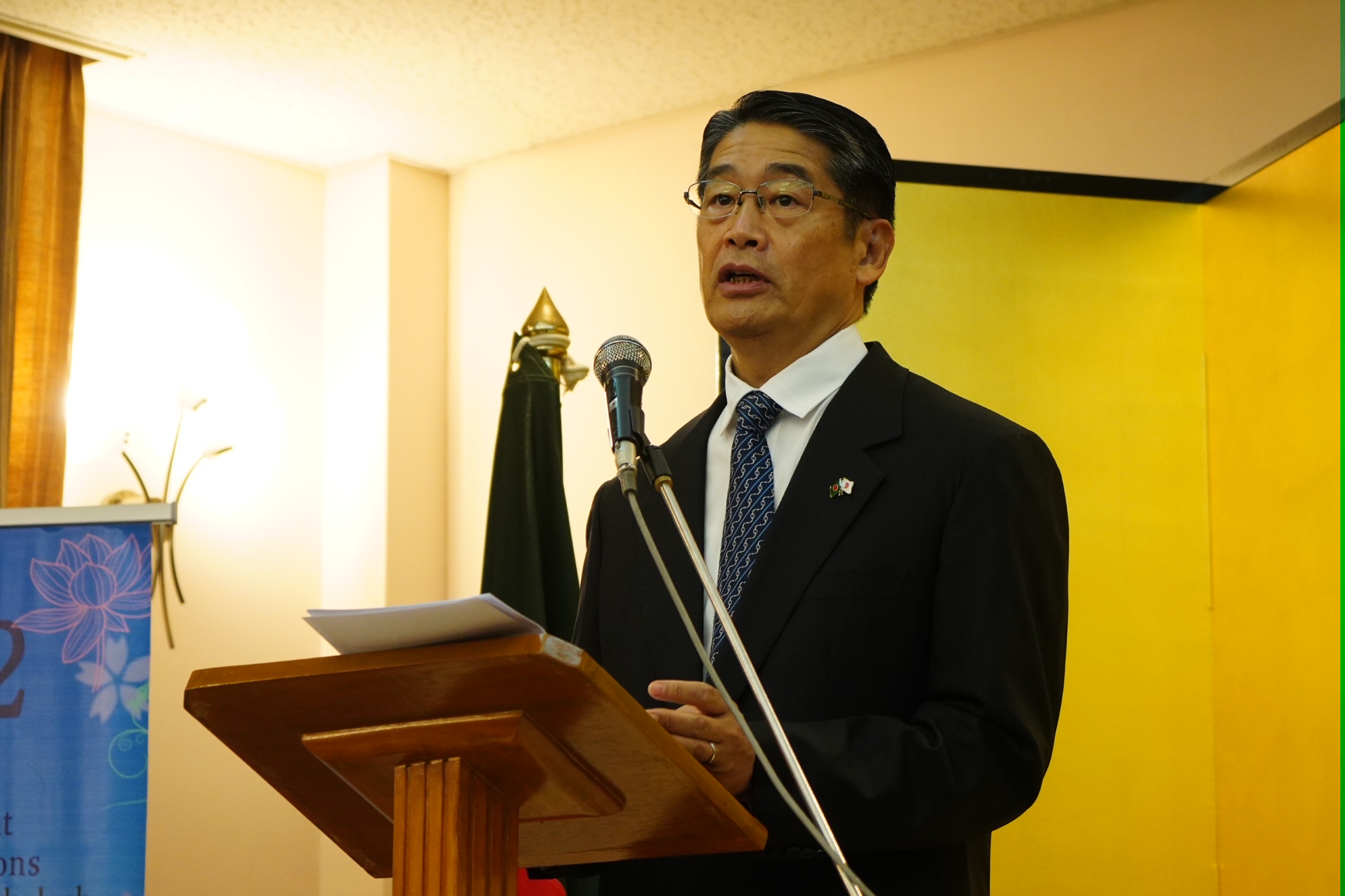 On 23rd February, the birthday of His Majesty Emperor Naruhito, the Embassy of
Japan organized a national day reception to celebrate his 62nd birthday.
The chief guest H. E. Dr. Dipu Moni, Hon’ble Minister for Education, H.E. Mr. Md. Shahriar Alam, Hon’ble State Minister for Foreign Affairs, H.E. Mr. Zunaid Ahmed Palak, Hon’ble State Minister for ICT, H.E. Dr. Md. Enamur Rahman Hon’ble State Minister for Disaster Management and Relief and Prof. Dr. Towfiq-e-Elahi Chowdhury, Hon’ble Adviser
to the Hon’ble Prime Minister graced the occasion.
In his opening speech, Ambassador ITO Naoki mentioned that “Today, Emperor
Naruhito turned 62, born on February 23rd, 1960. On May 1st, 2019, the Emperor
succeeded the throne after the Emperor Emeritus’ abdication.” “For us, this year’s
Emperor’s Birthday is a particularly auspicious occasion, as we celebrate the 50
th
anniversary of the establishment of our diplomatic relations between Japan and Bangladesh.
Japan recognized Bangladesh as a sovereign nation on February 10th, 1972. Earlier this
month, Embassy and the Ministry of Foreign Affairs co-hosted an event to celebrate 50
years of friendship.”
He also mentioned that “Prime Minister of Japan, Kishida Fumio, in his congratulatory
message to the anniversary, said, “The similarity of the flags of the two countries
symbolizes our special relationship.” And he expressed his determination to work even
more closely with Honorable Prime Minister Shiekh Hasina and the people of Bangladesh to
elevate bilateral relations to new heights. In her message, honorable Prime Minister Sheikh
Hasina also said, “Bangladesh is firm to engage with time-tested friend Japan for mutually
beneficial gains.””
He stated that “Our projects have made steady progress. A trial run of Dhaka Mass
Rapid Transit (MRT) Line 6 began last August. This December, the metro will start its
commercial operation. Bangladesh Special Economic Zone in Araihazar will also be ready
to host international investment. More and more Japanese companies are willing to grow
their businesses in Bangladesh, and we have enormous potential to expand trade and
investment between us.” “Other mega-infra projects for connectivity such as Hazrat
Shahjalal International Airport Expansion, Matarbari Deep Sea Port, and Bangabandhu
Railway Bridge are in line to be completed.”
The chief guest, H.E. Dr. Dipu Moni told in her speech, “People of Bangladesh shares
the feelings and the compassion of our Japanese friends in celebrating his Majesty,
Emperor Naruhito’s birthday today.”
She also mentioned that “Japan was among a first few major economies to accord
recognition to the newly independent Bangladesh on 10
th February 1972. Just a few days
ago, our two friendly countries organized commemorative event to mark 50
th anniversary of
our bilateral relations. Honorable Prime Minister Sheikh Hashina and Honorable Prime
Minister of Japan Fumio Kishida sent separate video message on the occasion of the 50
th
anniversary. In their messages, both the Prime Ministers have reiterated that their
commitments to strengthen and elevate our relations to new heights.”
She stated that “I’m confident that Japan will stand beside us in our journey towards
prosperity as always as reiterated by Ambassador ITO. I’m confident that bilateral relations
between our two countries will be strengthened in the days to come.”