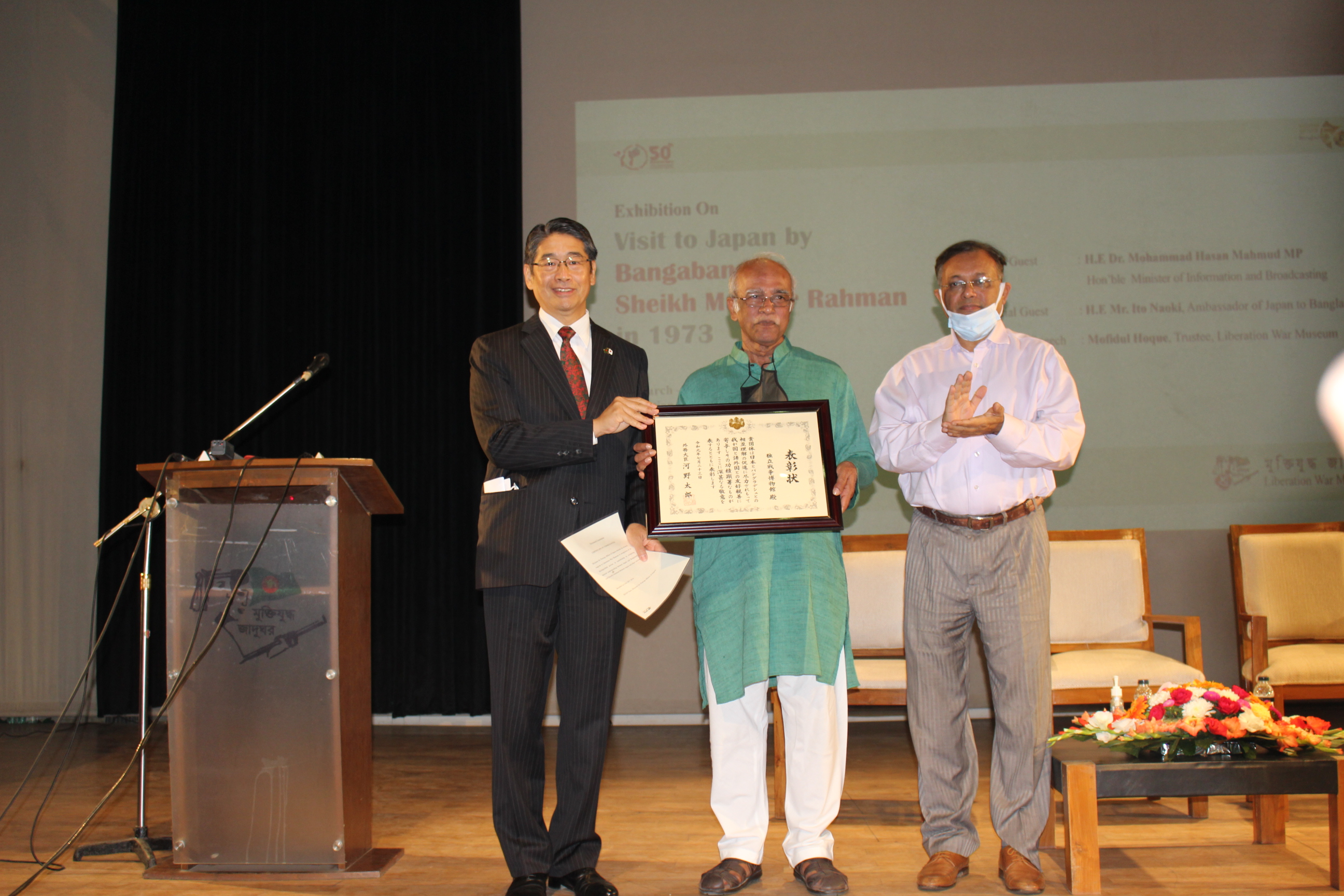 On March 10th, the Photo Exhibition on “A Visit to Japan by Bangabandhu Sheikh MujiburRahman in 1973” was inaugurated in the Liberation War Museum. In commemoration of the 50thanniversary of establishing diplomatic relations between Japan and Bangladesh, the Embassy ofJapan in Bangladesh and the Liberation War Museum jointly organized the exhibition. The Embassyof Japan has kept these 50 original photos with utmost care since 1973. These historic photos wereshowcased in the Museum for the first time ever. The exhibition will continue till independence day,March 26th. Mr. Mofidul Hoque, Trustee, Liberation War Museum, gave a welcome speech. In his opening speech, Ambassador ITO Naoki mentioned, “At the time of his visit, theJapanese people strongly supported the cause of independence. They extended heartfelt sympathy towar-torn Bangladesh, mirroring their own experiences since 1945. At the banquet in honor of PMSheikh Mujibur Rahman, PM Tanaka Kakuei conveyed in person that Japan will continue to supportBangladesh’s nation-building. That is how Japan’s journey as a prominent development partnerbegan. Bangabandhu paved the way for subsequent cooperation and friendship between the twocountries. In line with what he laid out, we have been proceeding with a series of collaborations withBangladesh.” He also stated, “I reiterate that we would like to make this milestone year a start of thenew era of the Japan – Bangladesh relationship. This Embassy will make the utmost effort to deepenfurther the multi-faceted relations, mutual understanding, and exchange of the two peoplesthroughout the year. Japan will stand by Bangladesh as a true friend. The exhibition will continue tillIndependence Day, March 26th. In this last month of Mujib borsho, I hope citizens of Bangladeshwill enjoy the exhibition with family and friends.” The chief guest, H.E. Mr. Muhammad Hasan Mahmud, Hon’ble Minister for Information andBroadcasting, told in his speech, “This is indeed great pleasure for me to be here to inaugurate thephoto exhibition on the visit of Bangabandhu Sheikh Mujibur Rahman in 1973. I must register mythanks to the government of Japan and the people, who have preserved these photos over the last 50years.’’ He further mentioned “To Bangabandhu, Japan was an example. He wanted to developBangladesh like Japan, a developed country. But he couldn’t do that because he was assassinated and the biggest development partner of Bangladesh over the last 50 years is Japan. I must register my thanks and gratitude for that to the people and to the government of Japan for their continuous support for our infrastructure development and overall development. ” In his concluding remark, the minister stated, “In this effort Japan has been with us for last 50 years. I strongly believe to make our dream real Japan will continuously help us in future as well. Furthermore, on this occasion, the Japanese Foreign Minister’s Commendation was conferred upon the Liberation War Museum in recognition of its distinguished service in contributing to promoting mutual understanding between Japan and Bangladesh. Since its inception in 1996, the Liberation War Museum has cooperated with Japan in various events, including the annual Hiroshima Day. For Further Information Contact: Public Relations,