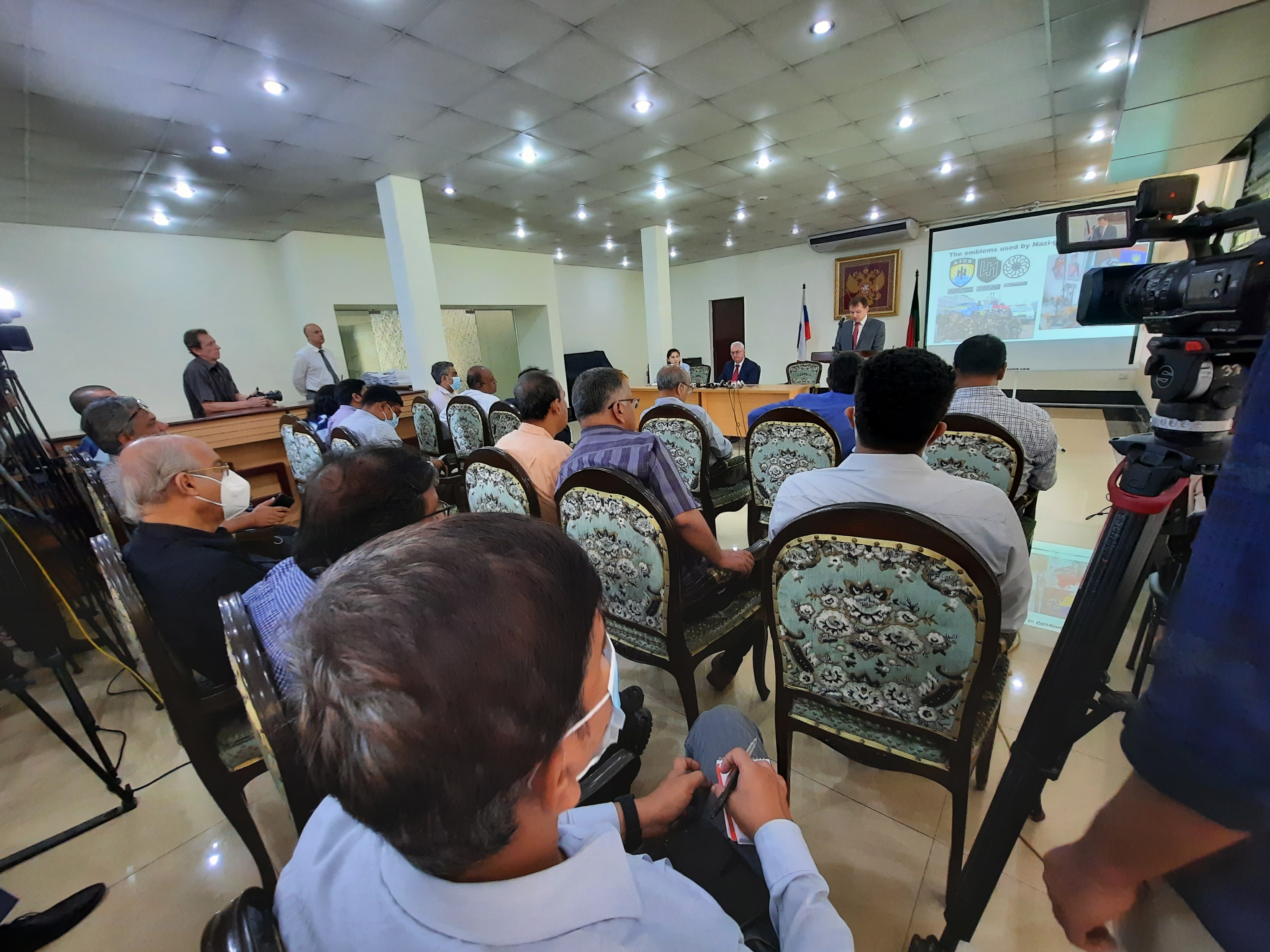 The Russian Embassy in Bangladesh Thursday held a press conference and slammed Western countries and media for spreading lies over Moscowe’s special military operation in Ukraine.

Russian Ambassador to Bangladesh Alexander V Mantytskiy shared his thoughts on a wide rage of issues at the conference titled “One month of the Russia’s special military operation in Ukraine: causes and results. The world of post-truth”.

Anton Chernov, counsellor (political), Amatula Kharnova, press attache, Aleksei Golubkin, second secretary, Anton Vereshchagin, third secretary, and Lt. Colonel Alexey Terekhov, assistant military attache, of the Embassy of the Russian Federation in Dhaka, among others, were present at the briefing session.
Dozens of local and foreign media correspondents attended the event at which he also reviewed the achievements of Bangladesh-Russia relations in recent years and explained Moscowe’s positions on a series of regional and international issues.
Ambassador Alexander V Mantytskiy interacted with the journalists and took a number of questions from them.
The conference lasted for about one hour and was held in a friendly and candid atmosphere.

Ambassador Alexander V Mantytskiy said the goal of this operation is protection of people who have been victimized and exposed to genocide by the Kyiv regime for the past eight years.

“To ensure this, we will seek demilitarization and denazification of Ukraine, and criminal prosecution for those who committed numerous heinous crimes against civilians, including citizens of the Russian Federation,” he said.

Over the past few years, under the close guidance of their Western handlers, the Kyiv authorities have morphed Ukraine into “anti-Russia”, said the diplomat.

He said the unfolding crisis in Ukraine has not been caused by the Russia-led special military operation. The current situation in Donbas and Ukraine is the direct consequence of the anti-constitutional coup d’état staged by neo-Nazi forces with the Western support in February 2014 as well as of the clear intention of the NATO member-countries headed by the US to use the Ukrainian territory to create security threats to Russia, to deter Russia, he added.

“Ukraine, a country with dozens of millions of Russian-speaking citizens, has waged unrelenting fight against the Russian language and the Russian culture. The ideology of neo-Nazism has been widely and aggressively implanted. Extrajudicial killings of political opponents and silencing of dissent have become a new normal.”

Since the beginning of the conflict, Ambassador Alexander V Mantytskiy said many of our partners have had concerns about further trade cooperation with Russia. The roots of such fears can be found in the course taken by Washington and its vassals to isolate Russia.

“Loud statements by Western politicians, numerous one-sided publications in biased media, restrictive measures, all this, according to the representatives of the collective West, was supposed to lead to the break-up of all contacts and relations in trade, science, space, energy with our friends and partners.”

He said, “We will no longer have an illusion that the West can be a reliable partner who does not abandon anyone and its own values at the drop of a hat. Also, we will do everything in our power to never depend on the West in the areas of critical importance for our people.” Enditem